& I don't exactly know how, one of the many snakes that have been displaced by the floods got into the house.

I discovered it by accident—got up from the computer in my study, walked out into the inside laundry to get a drink from the refrigerator, & stepped on it. Scared the shit out of both of us. The snake took off & slithered under the hotwater cylinder, I don't know exactly where I went, but the ceiling seems like the most probable place.

We tried to find it, but could find no trace. Got the name of a snakecatcher from the local council just in case. But its absence for the rest of the day halfway indicated that it may have headed outside again, through some opening which we couldn't see.

Wrong. Was working this evening—actually hadn't got that far; was checking my emails when I noticed a head swaying back & forth out from under the waterheater. We managed to coax/drive it out briefly from its hideout—time enough to take the pic below, sufficient room for it to be fully visible, but the space too confined to be able to take major action against it, especially with that hotwater pipe beneath it. 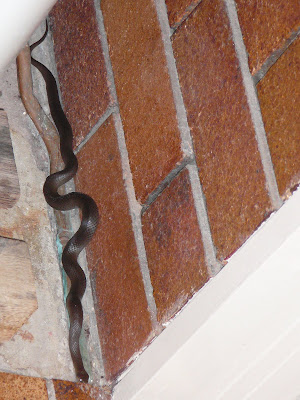 We moved things to give us clear visibility of the surrounding area, I developed battle strategies to try to keep it confined overnight, but decided to stay up for a while longer than normal so see if it would come out again.

Which it did. Out into the open. Where I met it with the back of a shovel.

I shall be visited by the Serpent King tonight. My dreams will be poisoned.
Posted by mark young at 1:34 AM

Mark, you have been visited with too many excitements of late. Though I have to say I personally always like finding snakes, even liked finding the poisonous ones when I lived in Africa, even when they tried to bite me.

Is that a brown snake Mark?

Anyway, it's now stinking up our council garbage bin, along with the cane toad that got caught so solidly in the diaphragm of our pool cleaner I couldn't get it out.

yeh, looks like a brown to me. met one out west when I was there & spent quite some time with it - on parallel tracks as it were . . .