the Greenpeace ship Rainbow Warrior was bombed in Auckland Harbor. 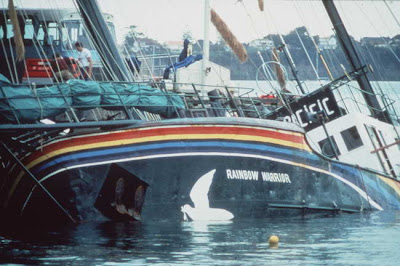 The first bomb exploded at 11.38pm, lifting those in the mess off their seats. Davy Edwards rushed into the engine room to find a hole the size of a car, water pouring in. Everyone was ordered off the ship but some went back to grab possessions. Fernando Pereira, the ship's photographer, was one of them, perhaps going after his precious cameras. There was a second explosion and, caught in a rush of water, Pereira drowned.

The crew were in shock. They gave statements to the New Zealand police, who reacted swiftly to the first act of terrorism on their soil. Piecing together statements from members of the public, they were soon questioning a French couple, agents Prieur and Mafart of the French secret service.

Initially, the French government denied all knowledge but it soon became obvious that they were involved. Soon French Prime Minister Fabius appeared on television to tell a shocked world, "Agents of the DGSE (Secret Service) sank this boat. They acted on orders." The French minister of defense resigned.

After the bombing, the Rainbow Warrior was given a final resting place at Matauri Bay, in New Zealand's Cavalli Islands. It has become a living reef, attracting marine life and recreational divers.

The idea was first proposed by the New Zealand Underwater Association. It seemed a fitting end for a ship that had spent its time protecting the marine environment.

It was towed north with a patched hull on 2 December 1987. Ten days later, a crowd of well-wishers looked on as it was given a traditional Maori burial.

Further details are included on the Greenpeace site from which the above is taken.
Posted by mark young at 8:12 PM